Thanks to Helen Abeles, a true business leader and a friend

In 1954, when Ben Gurion was prime minister, he travelled to the USA to meet with President Eisenhower to request his assistance and support in the early and difficult days of the State of Israel. John Foster Dulles who was the then secretary of state confronted Ben Gurion and challenged him as follows:

Ben Gurion answered him as follows:

“Look, Mr Secretary of State – approximately 300 years ago the Mayflower set sail from England and on it were the first settlers who settled in what would become the largest democratic superpower known as the United States of America. Now, do me a favour – go out into the streets and find 10 American children and ask them the following:

·         What were the conditions of sailing during the voyage?

I’m sure you would agree with me that there is a good chance that you won’t get a good answer to these questions.

Now in contrast – not 300 but more than 3000 years ago, the Jews left the land of Egypt . I would kindly request from you Mr. Secretary that on one of your trips around the world, try and meet 10 Jewish children in different countries. And ask them:

·         What did they eat during the period when they were wondering in the desert?

Once you get the answers to these questions, please carefully consider the question that you have just asked me!” 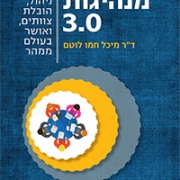