We see a critical need to break silos in the government, bring senior civil servants to work together, and form new partnerships. These needs were addressed in two high-profile conferences which were held recently:

1. Last month, for the first time in Israel, a conference was held for the heads of all Government Ministries and Units – Director-Generals of Government Ministries, Heads of Security Forces, Heads of Government Units (e.g., Tax Authority and Water Authority), and Directors of Hospitals. In an event arranged by the Civil Service Commission and the JDC Institute for Leadership and Governance, these leaders came together to discuss the new reform of the civil service. 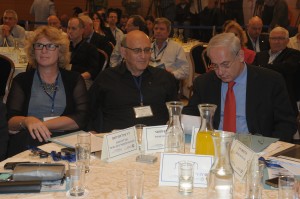 Based on the Government of Israel’s decision following the Trajtenberg report, the Civil Service Commission is embarking on a reform of the civil service in Israel, aimed at increasing the mobility of civil servants among the different ministries, introducing differential wages, attracting the best and brightest to the civil service, delegating authority to the ministries, and improving recruitment processes.

The 100 attendees at the Conference were divided into roundtables, each headed by a senior civil servant, and facilitated by an Institute staff member. Heads of tables included the Director-Generals of the Ministries of Finance, Communication, Education, the Director-General of the Prime-Minister’s office, and the Deputy Attorney General. During the event, each table discussed a different topic that is central to the reform.

The Prime Minister attended the event and addressed the forum, noting that the civil service needs to “put the citizens at the top of the priority list, be effective, mission oriented, and to measure its outcomes”. See the attached file for photos of the event.

Other efforts connected to the reform in which the Institute is involved, include a needs assessment of the training needs of senior civil servants, and a new program for Deputy Directors of Government Ministries in charge of Personnel and Administration, aimed at improving the level of public service in Israel.

A bit of background information: the work of most government ministries in Israel is divided into regions – North, South, Haifa, etc. The Regional Directors report directly to the Director-Generals of their ministries, and are uniquely positioned to connect between the central government and local authorities. However, the Regional Directors lack a platform for collaborating with each other, while there is clearly a need for working together. In fact, we heard from one of them that he has the responsibility, yet not the authority, to deal with certain issues. And only through collaborating with other Regional Directors could he solve some of the challenges at hand.

We therefore initiated Forums for Regional Directors, and over the past year the Institute created new Forums, and reinvigorated existing ones. There are currently four active Forums – North, Center, Jerusalem, and South. The goals are to learn from each other, develop a network for collaboration, and create an impact by focusing on a specific topic that requires a combined effort. The topics that the Regional Directors chose to focus on are:

–  Identifying the potential, and maximizing the opportunity, of the move of army bases to the Negev

The Institute’s role is to convene the forums, facilitate the meetings, identify needs, assist in deciding which topics to focus on, and provide ongoing guidance to the groups.

The National Conference held last month was an opportunity for each Forum to hear what others are doing, engage Director-Generals in the process, and provide additional networking opportunities. Roundtable discussions were held (facilitated by Institute staff), where Regional Directors from different regions shared their progress with each topic, and collected insights and input from their colleagues. Afterwards, there was a panel discussion with the Director-Generals of the Government Ministries, many of whom stressed the importance of the Forums.

The Conference for Director-Generals, and the National Conference for Regional Directors, are examples of what the JDC Institute for Leadership and Governance is about – bringing leaders together for social change.