I was extremely moved after reading and learning about Waris Dirie. I was actually quite surprised to find that others did not see her heroic battle to freedom as a superb example of feminine leadership at its best. It may be that I was deeply moved once I grasped what a courageous little girl she was. I always loved and cared for children. Or perhaps was it because I was astonished to see what a powerful woman she grew up to be. Or perhaps it was because I was so glad to realize that there is still so much hope in this world and so much beauty, thanks to women like Waris Dirie. 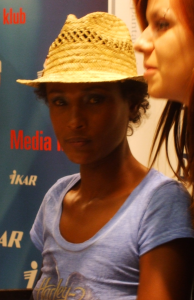 Waris was a five year old child in Somalia when she went through the horrific procedure of women’s circumcision. This horrible act is carried out using an non-sterilized blade or a sharp stone, and sometimes bare teeth. No anesthetization is used. It causes indescribable pain to little girls as it involves an immensely sensitive part of the body. This procedure causes the removal of the clitoris and the vulva leaving the little girl with a sawn vagina and a urine hole so small it takes long minutes to urinate. When the girls reach puberty, they suffer horrible pain during menstruation because the opening is almost completely blocked.

Waris was born into a nomadic tribe in the Somali Desert.  Her family herd sheep and camels. Her first shaping experience was the circumcision. Her second one was when her father sold her at the age of thirteen to a sixty years old man for six camels.

What would you have done if you had grown up in a tribal society that held these customs? Going through circumcision at the age of five, believing that “this is a necessary part in becoming a woman”, raising your younger siblings, minding the live-stock, knowing that survival is above all? It is hard to tell. It is quite likely that you would accept and live by the tribal laws.

Waris Dirie did not accept it at all. At the young age of thirteen, (around the age of Israeli girls’ Bat Mitzvah), she escaped.  Fleeing her forced marriage, leaving her family and her whole life behind, she arrived at Mogadishu, and after a short stay there, she traveled to London, where she settled and got her big break.

In her book “Desert Flower” (translation of her name), and in a breathtaking movie made after that book, she told her amazing story. Her book became an instant best seller around the world.  In Israel, Oshrat Kotler made an investigative profile story on Waris Dirie which aired on Channel 10 last year.

I believe that above all, Dirie embodies in her actions courage, revolutionary thinking, and women’s leadership of the deepest, most breath-taking sense one can imagine.

She was a thirteen year old child when she escaped her Somali home by walking through the desert, facing many perils, including hunger and rape.  This young African child arrived at the big city of London and worked there as a maid, after her uncle left she was on her own. Despite this horrible beginning, she became an international super model, played in a James Bond movie, and finally arrived at her third stage of change. She found the courage to tell her story to the world. She is a Muslim woman wearing an elegant head cover, who became a spokeswoman and an ambassador to the United Nations on the topic of fighting female circumcision.

The most moving part for me was realizing that Waris sees herself as a lucky person! She lives a full happy life; she is thankful for what she has and blesses her good fortune, despite being so aware of the horrific barbarian act of her circumcision.

There are about 50 million circumcised women in the world. Every year one and a half million women are added to this circle of misery.

For some reason, violent acts against women are part of many cultures. In China, they bandaged young girls’ feet to keep them from growing, to the point of breaking their tiny bones, resulting in tiny 3 inch feet.  Look at the hideously long neck of women in Africa, the full body cover of Muslim women, and the variety of plastic surgery and starvation diets of Western World women. These are aggression in the name of tradition or culture, that women actually glorify. But then again, do they really have a choice?

So yes, I would very much like to meet Waris Dirie : one very special woman, who uprooted herself from her family and her homeland, and reinvented herself in the world; a woman who became an ambassador of change. She is an inspiring woman; a fearless woman who does it all using peaceful words, not war. What can I say? Waris Diiriye embodies feminine leadership at its best.